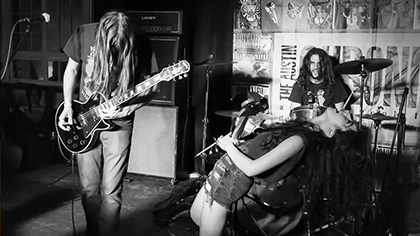 Austin-based power trio The Well redefine heavy rock by merging massive riffs with sophisticated melodies. Their progressive sound stems from a nostalgic desire to blend different musical styles as diversified as Joy Division to Blue Cheer. The group blossomed when guitarist/vocalist Ian Graham was fired from his previous band. Determined to redirect his musical focus, Graham hooked up with bassist Lisa Alley and the two began picking out riffs in their east-side garage. Rounding out their sound, they stole drummer Jason Sullivan from Graham’s old band in a tale of vengeance and karma. His solid groove and reckless tribal beat gave the three-piece their ideal primal attack.

Due to their psychedelic doom edge, The Well reap comparisons to Black Sabbath, Sleep, Electric Wizard and Uncle Acid and the Deadbeats. As fans of cult horror films, they embrace the sinister, revel in dark themes and find inspiration in haunting echoes. The dual vocals of Graham and Alley evoke an ancient language that carries a mystic spell.