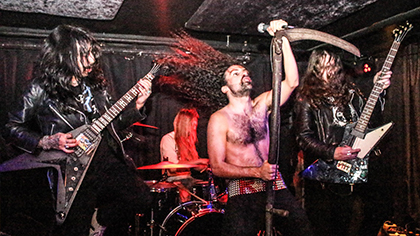 When R.I.P. came crawling out of the sewers of Portland, OR last year, their grimy, sleazy Street Doom was already a fully formed monstrosity that quickly infected the minds of everyone it encountered. Now, born from the band's declining state of mental health and increasing focus on songwriting, Street Reaper – their new album is an even more unhinged and menacing album that their debut In The Wind.

Operating on the belief that doom is not tied to a tuning or a time signature, but rather a raw and terrified feeling, R.I.P. eschews well trodden fantasy and mysticism tropes of the genre and focuses on conveying the horror and chaos inherent in the everyday reality of the human mind. With several years of touring under their heavily studded belt, R.I.P. has distinguished themselves from the interchangeable hordes of bands trying to play heavy metal by crafting an aesthetic and a sound all their own, focusing on the things that make metal heavy rather than adhering to the formulaic confines of a particular sub-genre.

Their last album Street Reaper was released on October 13th, 2017 via RidingEasy Records.