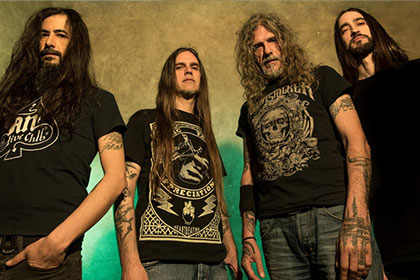 NIGHTSTALKER have earned a reputation due to their pure Rock ‘n Roll attitude and their constant live activity, and been lauded with the highest praise and respect since their beginning in the early 90’s.

Heavy sound, groovy rhythms, intense bass playing. All together with a lot of catchy melodies and the power of Argy’s vocals are the secret of the music of Nightstalker. Raw rock 'n roll simplicity, stunning riffs and electric haze are what have kept the band going for more than 20 years.

The whole concept was realized by the singer (and drummer at that time), Argy, who was the founding member of the band. Together with Andreas (ex Rotting Christ member), who joined in 1992, managed to combine their heavy rock influences with funky rhythms and grunge melodies. With all these elements they released the first EP called ‘SideFx’ in 1994. With the second, but first full length album ‘USE’ (1996), the band established their rich songwriting, the heavy sound that has been their trademark to this day. After a ‘dark era’ with member changes but also an EP release (The Ritual,2000), which was the deepest, darkest psychedelic album they have ever made, the band managed to gain recognition and a new strong fanbase with the release of the ‘Just A Burn’ album. In 2009 the band released the ‘Superfreak’ album through the US label ‘Meteorcity’. In 2012 the band signed with ‘Small Stone Records’ to release album, titled ‘Dead Rock Commandos’. The album gained a lot of great reviews worldwide and the release combined with european tour and participation in summer festivals and established the band’s name in bigger audience, with the success of the video clip ‘Children of the Sun’ (with millions of views). In 2016 the band released the album ‘As Above, So Below’ through Oak Islands Records which is followed by hundreds of live gigs (tour and festivals) and reached a milestone when Greek Metal Hammer released a tribute CD by other bands playing Nightstalker’s covers!

In 2019 the band signed with ‘Heavy Psych Sounds’ in order to make a step forward with the release of the ‘Great Hallucinations’ in October 2019. The first single will be out in July 2019 and a European tour follows in Oct-Nov 2019. 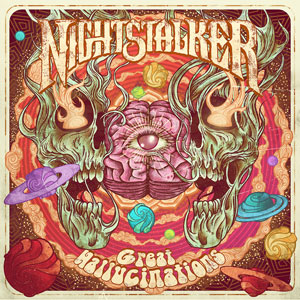