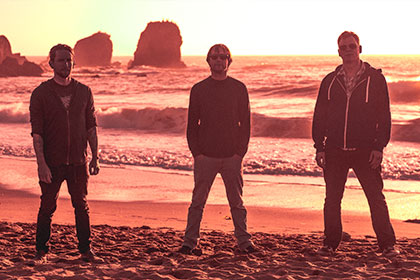 San Francisco veterans Disastroid have been serving up sludgy, grunge-infused stoner rock for the better part of a decade now, refining a sound that weaves heavy riffs together with angular guitar lines, odd time signatures, and hazy walls of fuzz. As influenced by 90's noise rock as they are by modern psych, doom, and post-metal, Disastroid delivers thick, satisfying stoner rock stomp while also embracing layers of noise, tripped-out feedback, and unpredictable song structures.

The current lineup of singer/guitarist Enver Koneya, bassist Travis Williams, and drummer Braden McGraw coalesced in 2011. They’re united by a desire to make heavy music that's loose instead of mechanical, a motivation to explore methods that make them sound bigger and more varied than a traditional rock trio, and a shared affection for the Amphetamine Reptile back-catalog. Thematically, their songs steer clear of genre cliches, touching instead on scattered aspects of modern life: technology fatigue, immigration, nuclear deterrence, the monotony of work, the existential dread of aging. Despite the subject matter, Disastroid never take themselves too seriously, injecting their live shows with an infectious sense of humor and their songwriting with math-rock quirks.

Their original approach, captured on their 2014 record “Missiles” and the 2017 follow-up “Screen”, has made them one of the most essential bands in the Bay Area music scene. Over the last few years they’ve shared the stage with bands like Fu Manchu, Mondo Generator, Helmet, Church Of Misery, Big Business, Oxbow, Fatso Jetson, and Yawning Man, and made an appearance at Psycho Las Vegas in 2018.

Their latest record, “Mortal Fools” is their heaviest and most expansive-sounding album to date. Produced by Tim Green (Nation of Ulysses, The Fucking Champs), it’s sonically focused on what Disastroid does best, laying deep vocals and fuzzed-out riffs on top of a relentless, pummeling rhythm section. At the same time, it’s loose enough that it takes some unpredictable twists and turns, conveying the band's rough edges, sense of humor, and noisy, experimental streak.