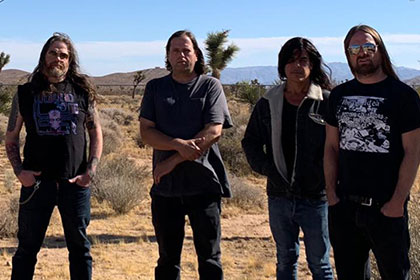 Anyone familiar with the terms “Stoner Rock” or “Desert Rock” have surely heard the names FU MANCHU or YAWNING MAN. If you’re a die hard fan of the genre, or a causal observer, you know that both bands have been dishing out quality material since the beginning. While stylistically different, both band occupy legendary status. FU MANCHU’s sun-drenched, stratospheric, fuzz worship sound and YAWNING MAN’s ethereal, ambient delay have never been crossbred until now. It’s certainty a good time to be alive if you’re a fan of either band. We bring you BIG SCENIC NOWHERE...

Like many of the best things in life, the root collaboration behind Big Scenic Nowhere between guitarists Gary Arce of Yawning Man and Bob Balch of Fu Manchu started with tacos. Specifically, Del Taco. Founded in 1964 in the Mojave Desert in California, the fast food chain has stores throughout the Golden State and the Southern US, but it remains a SoCal institution. Arce, just back from tour with Yawning Man and celebrating the comforts of home, posted on social media of his triumphant return to his local Del Taco. Balch responded with his usual order – a regular red burrito with extra cheese and sour cream – and a band was begun.

Of course, it’s never really so simple.
Bob and Gary have been acquainted since the ‘90s, when Fu Manchu would practice in the garage of the house Gary lived in with other members of the desert scene. Gary remembers coming home from his construction job at the time, working outside in the desert summer, ready to kick back and crack a beer, only to be unable to watch television because Fu Manchu were so loud. They’d bump into each other over the years periodically and Bob eventually brought Gary in to film a piece for his instructional guitar series, PlayThisRiff.com. After the above-mentioned Del Taco post, it was Gary – whose collaborative efforts have been myriad in outfits like WaterWays, Zun, Ten East, etc. – who finally called Bob to jam. While the project would grow soon enough to encompass players like Tony Reed (Mos Generator), Mario Lalli (Fatso Jetson, Yawning Man), Per Wiberg (Spiritual Beggars, ex-Opeth), Bill Stinson (Yawning Man), Nick Oliveri (Mondo Generator, ex-Kyuss, etc.), Lisa Alley and Ian Graham (both of The Well), Alain Johannes (Them Crooked Vultures, Chris Cornell, Eleven) and Thomas V. Jäger (Monolord), Big Scenic Nowhere is founded on Balch and Arce tossing guitar riffs and leads back and forth, piecing together song parts one movement at a time. Jamming. Sharing music. Developing a chemistry to build something new based on their individual experiences. In this way, Big Scenic Nowhere is the heart of what collaboration should manifest. Something that grows stronger for the cohesion between those who make it happen.

Gary traveled to Bob’s place, Bob recorded the tracks and assembled what became more fluid progressions, and songs resulted, highlighting the differences of style between the two of them – Balch a fuzz-laden guitarist’s guitarist tuned to D standard, Arce a delay-drenched sonic explorer with a signature tone tuned to DAD’GAD – and the resulting cohesion from their efforts.

After Balch arranged the tunes they headed into the studio to get basic tracks. Over the course of a few months musicians started to send in their contributions to the record. Vocals from Tony Reed came first, then Lisa Alley and Ian Graham from The Well and lastly Alain Johannes. Tony Reed also provided some vintage synth sounds, along with Per Wiberg, and Alain added some extra guitar parts. The end result is an album that is so dense with talent that it’s frightening. It’s a result of seasoned artists that have grown to this point. While all of their styles are different, the collaboration created a beautiful and unique album. “Vision Beyond Horizon” will echo through the ages as a document of our time, a bible to all things stoner and desert and then some. It’s a very heady album and deserves full attention. So sit back, relax, and take a trip behind the sonic curtain. Let “Vision Beyond Horizon” be your guide for years to come. 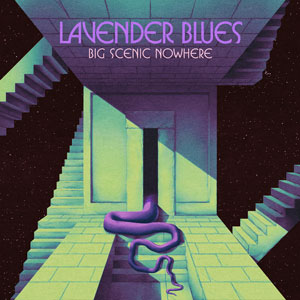